The Leopoldina Academy Circle of Friends reg. ass. recently had the overgrown grave site of the XV. Leopoldina President, Carl Hermann Knoblauch (1820 - 1895), restored on the graveyard (“Stadtgottesacker”) in Halle and also took over the sponsorship for it. In doing so, he followed the wish of the Academy's leadership and at the same time honoured Knoblauch's services to the Leopoldina.

With the election of its XV. President Carl Hermann Knoblauch in 1878, the Leopoldina settled in its present location in Halle (Saale). At the same time, the Leopoldina Academy Circle of Friends is helping to preserve the city's graveyard, which was restored piece by piece after German reunification. This is an important monument of the city's history made of stone; families of industrialists, professors or officers were buried here. Among them are the parents of the composer Georg Friedrich Händel, the pietist August Hermann Francke and the anatomist Philipp Friedrich Theodor Meckel.

Carl Hermann Knoblauch, was appointed lecturer in experimental physics in Halle in 1853. He worked here for the rest of his life and became a full professor. In this capacity he also served as rector at the Alma Mater Halensis from 1868 to 1871.

In 1862, the Leopoldina accepted him as a member and in May 1878 elected him to succeed the XIV. President Wilhelm Behn, who, like his predecessor Carl Gustav Carus, conducted official business from Dresden. Under Knoblauch's presidency, the Academy thus moved its seat in 1878 from the residential city of Dresden to the up-and-coming central German industrial and university city of Halle (Saale) and settled there. This meant that the Leopoldina moved from the Kingdom of Saxony to the Province of Saxony of the Kingdom of Prussia, and Halle has been its home town ever since. This was also accompanied by the relocation of the library, previously located in Dresden in the Poliergasse, to Halle in the Jägergasse. But it was not until the XVI. Academy President, the geologist Karl Freiherr von Fritsch (1838 - 1906), succeeded in giving the library a new home in what is now the August-Bebel-Strasse in Halle with the construction of what was then a highly modern library building.

Carl Hermann Knoblauch found his final resting place on the Stadtgottesacker in Halle. This is a cemetery complex which was built from 1557 onwards modelled after the Italian Camposanto complexes and is considered a masterpiece of the Renaissance north of the Alps. With the restoration of Knoblauch's tomb, the Leopoldina is helping to honour its XV. President, to whom it owes its present seat. At the same time, it is helping to preserve the city graveyard, which was repaired piece by piece after German reunification and is an important monument of the city's history made of stone. Families of industrialists, professors or officers were buried here. Among them were the parents of the composer Georg Friedrich Händel, the pietist August Hermann Francke and Philipp Friedrich Theodor Meckel, son of the founder of pathology and himself an important anatomist. 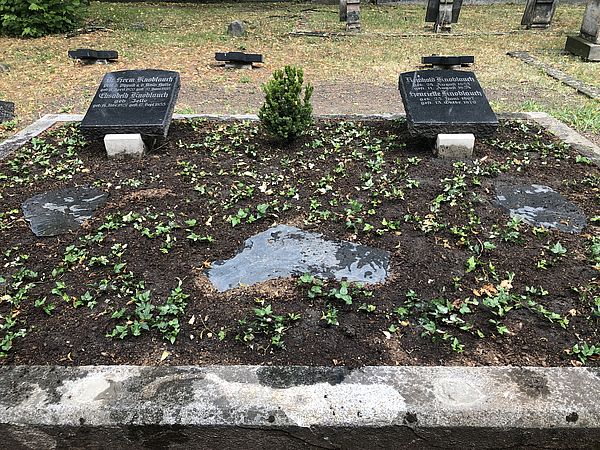 Grave of the XV. President of the Leopoldina  C. H. Knoblauch on the Stadtgottesacker Halle, Photo Santer zur Horst-Meyer

Award of the Johann-Lorenz-Bausch Scholarship 2020