The outstanding Halle molecular biologist and former Leopoldina President Prof. Dr Benno Parthier (1932 - 2019) was remembered in a dignified memorial service on the 23th of January 2020. His term of office as XXIV. President (1990 - 2003) included the restructuring of the Academy after German reunification. He successfully adapted it to the conditions of the entire-German science system and prepared it for completely new tasks. The memorial service organised by the Leopoldina Presidium together with the Directorate of the Leibniz Institute of Plant Biochemistry IPB paid tribute to his services to the Leopoldina, his commitment to science policy and his scientific work on plant biochemistry. The Leopoldina Academy Circle of Friends reg. ass. supported the ceremony financially and played an active role, with  its board member Prof. Dr Jutta Schnitzer-Ungefug, Secretary General of the Leopoldina, acting as moderator. It took place in the presence of his family and many companions and was documented in the series Nova Acta Leopoldina Neue Folge, Supplementum Nr. 38. 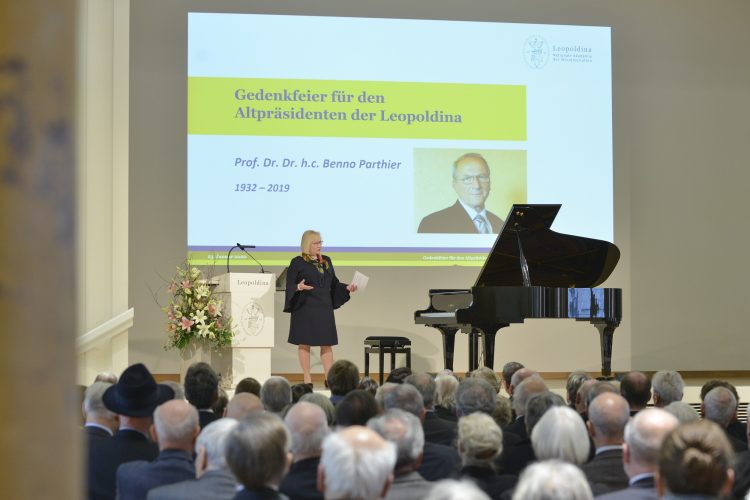 In his welcoming address, the Minister President of Saxony-Anhalt, Dr Reiner Haseloff, paid tribute to Benno Parthier's services to science policy, for which he had been honoured with the Order of Merit of the State of Saxony-Anhalt in 2018.

The XXVI. Leopoldina President Prof. Dr Jörg Hacker (2010 - 2020) described the challenges that lay before Benno Parthier when he took office in 1990. When Parthier was elected in 1989, the end of the GDR had not yet been foreseeable. He recalled Parthier's scientific achievements, which began with the botanist Prof. Dr Kurt Mothes in Halle, made him head of the Department of Molecular Biology at the Institute of Plant Biochemistry (IBP) in Halle after his habilitation, until he was elected head of the Institute in a democratic process by its staff in 1990. Thus, from 1990 onwards, two great challenges laid ahead of him, the honorary leadership of the Leopoldina and the full-time leadership of the IBP.

The next two speakers had been closely associated with Benno Parthier within the framework of the Academy's tasks. The XXV. Leopoldina President Prof. Dr Volker ter Meulen (2003 - 2010), a clinical virologist from the University of Würzburg, became a member of the Presidium during Parthier's term in 1993, and was its Vice-President from 1999 to 2003 before taking over the Presidency himself. Volker ter Meulen had already become a member of the Leopoldina in GDR times and was able to report first-hand on the transformation process that took place under Benno Parthier. During his own term of office, the Leopoldina was designated a National Academy of Sciences in 2008.

Prof. Dr Ernst-Ludwig Winnacker, Leopoldina Vice-President from 1995 to 2005, was able to contribute his experience as Director of the Laboratory for Molecular Biology at the Gene Centre of the Ludwig Maximilians University in Munich and as President of the German Research Foundation (1998 - 2006) to the further development of the Leopoldina after reunification. He was closely associated with the Parthier family for decades and kept in close contact with Benno Parthier until the end.

In her speech, the former Mayor of Halle, Ingrid Häussler, emphasised the solidarity of the city and its citizens with the Leopoldina. For the city marketing, Halle as the seat of the Leopoldina was an important asset in the phase of economic change after 1990. She recalled Benno Parthier's interest in creating connections in the city after 1990, making Leopoldina events accessible to the public and establishing scientific networks. The city of Halle recognised this during her tenure in 2002 by awarding Benno Parthier the honour goblet, the city's second highest honour next to honorary citizenship.

Leopoldina Vice-President Prof. Dr Dr Gunnar Berg also remembered Benno Parthier's scientific achievements. Parthier had taken over the Institute of Plant Biochemistry (IBP) in 1990 and became founding director of the then renamed Institute of Plant Biochemistry (IPB) in 1991. The IBP went back to Parthier's academic teacher Kurt Mothes, the XXII. Leopoldina President (1954- 1974), who had founded the Biochemistry of Plants Unit in Halle in 1958. During Gunnar Berg's time as Rector of the Martin Luther University Halle-Wittenberg (1992 - 1996), Parthier was appointed Professor of Cell Biochemistry at the Martin Luther University, an appointment that was not granted to the strong character Parthier during GDR times.

Prof. Dr Steffen Abel, Executive Director of the IPB since 2017, reflected on Benno Parthier's services to the IBP and IPB from the perspective of a former Halle student and graduate student of biochemistry who had already experienced Benno Parthier's work during GDR times. After reunification, financed by the Boehringer Ingelheim Fund, Abel was the first scholarship holder from the new federal states to have the opportunity to move to Berkeley, USA, as a postdoctoral researcher at the Plant Gene Expression Center of the University of California. In 2009, after working as a full professor at the Department of Plant Sciences at the University of California in Davis, USA, he returned from the USA to the Martin Luther University as a university professor of plant biochemistry and at the same time took over as head of the Department of Molecular Signal Processing at the IPB. For Steffen Abel, Parthier was “an inspiring scientist who set an example, a courageous, steadfast and principled personality”, something very special. Prof. D. Dierk Scheel, Professor of Developmental Biology at Martin Luther University Halle-Wittenberg, who took over the management of the IPB from Benno Parthier in 1998, also paid tribute to his predecessor as an extraordinary scientist and person.

The personal recollections of two of Parthier's former colleagues, Professor Dr Dr Bettina Hause and Professor Dr Claus Wasternack, formed the conclusion of the speeches. Both have doctorates in biochemistry and were closely associated with Benno Parthier for many years at IBP. Bettina Hause said in her speech “Benno Parthier has had a decisive influence on my scientific life, indeed on my scientific career.”  The plant hormone jasmonic acid plant hormone studied in Parthier's research group and the jasmonic acid-induced proteins (JIPs) also became her field of work. She experienced him as a “teacher, mentor and supporter”. Claus Wasternack asked Benno Parthier in autumn 1989 if he wanted to lead his jasmonate working group at IBP “after he [Parthier] was designated institute director and Leopoldina president. I wanted to, because the Jasmonat work was at the Institute, nationally and internationally just at the beginning of an exponentially growing curve of success, in which we could fortunately, always share in the following years.”

The commemoration was framed musically in a very professional manner. At the beginning, the pianist Matthias Kirschnereit, one of the most successful pianists of his generation, celebrated by the Süddeutsche Zeitung as a “poet at the piano”, played pieces by Felix Mendelssohn Bartholdy and his sister Fanny Hensel. The finale was Beethoven's String Quartet op. 74 in E-flat major “Harp Quartet” performed by one of the most distinguished European formations, the Klenke Quartet from Weimar.