Completion of the Historic Ritual Room

Since autumn 2018, the art-historically valuable former ritual room VI of the Freemason Lodge “Zu den Drei Degen” (now the main building of the Leopoldina) has shone in new splendour.

With the acquisition and reconstruction of the new main building on the Jägerberg, the Leopoldina has also visibly gained a very special radiance far beyond Halle and the state of Saxony-Anhalt.

The Leopoldina Academy Circle of Friends reg. ass. was very happy to take up the suggestion of the XXVI. Leopoldina President Jörg Hacker to enable the restoration of the only unrestored room in the building, which had not been possible before due to time and financial restrictions.

The board of the Circle of Friends approved a considerable sum for the restoration in 2014 and thanks all its members for their generous support, without which this ambitious project could not have been realised.

In terms of art history, the now restored VI degree ritual room in the former lodge house “Zu den Drei Degen” is of great importance. For example, as Helmut Reinalter also points out in his article below, the construction of ritual rooms for higher degrees was only permitted in selected places, and the number of Freemasons who received these degrees was relatively small.

It almost borders on a miracle that the precious room decoration was preserved at all. After the former lodge house “Zu den Drei Degen” ,whose origins date back to 1822-1824, was handed over to the city of Halle  (Saale) in the 1930s, the Masonic objects were completely removed. Only a single ritual room has been preserved, its original painting disappeared under a coat of white paint.

The richly detailed frescoes and wall paintings of the ritual room were now uncovered between 2014 and 2018 by the art historian and graduate restorer Dr Gerhard Richwien, funded by the Leopoldina Academy Circle of Friends. He was closely assisted by the extremely knowledgeable art historian, who is also the area advisor for the city of Halle, Dr Sabine Meinel, and the qualified restorer Torsten Arnold (both of whom work at the Saxony-Anhalt State Office for the Preservation of Monuments and Archaeology), for whom we would like to express our special thanks.

From autumn 2018, the room can also be visited as part of art-historical tours of the Academy's main building. Registration is required for this. 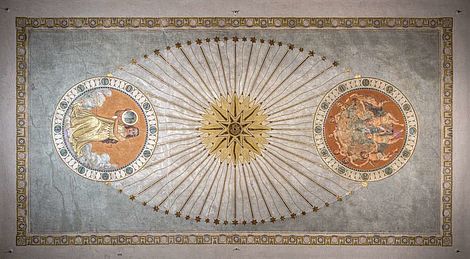 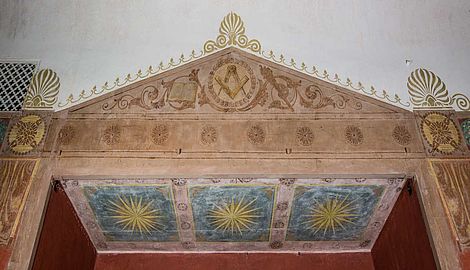 Altar niche with a pediment in the east section of the ritual room.

Student Programme on the Occasion of the Annual Members’ Assembly 2018

Award of the Johann-Lorenz-Bausch Scholarship 2018